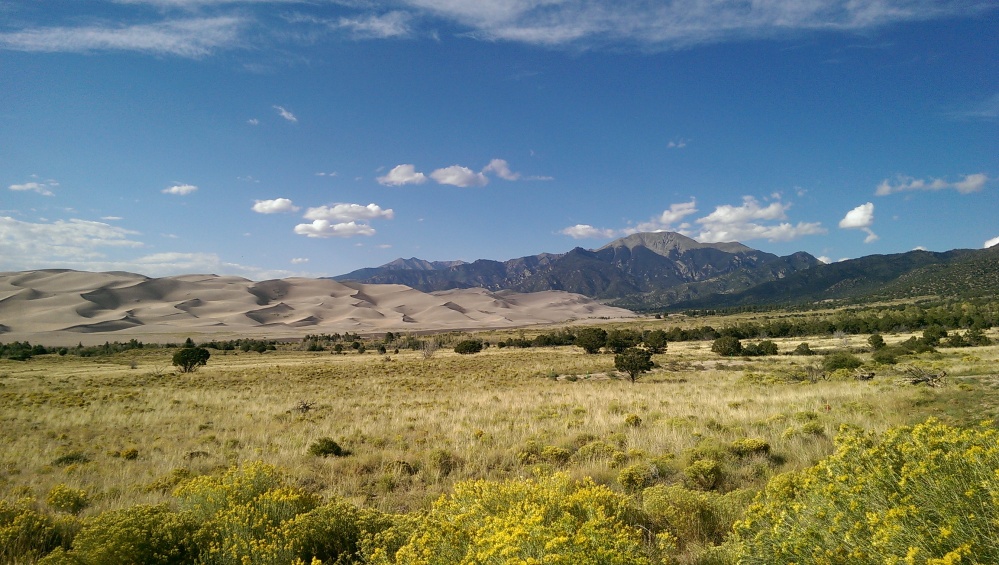 Great Dunes state park has always been on the bucket list for me. There was no way I would skip this opportunity to visit such a unique park. The Trans Am Trail passes a couple hours from it, so we decided to make a day of it and swing on down to the Dunes.
You can see the Dunes from miles away in the valley in which they are situated, creating a growing excitment in the back of my mind, though I stayed fairly composed so as not to come off like a kid going to the zoo for the first time. “Fairly composed” being subjective. So far, this has to by my favorite national park. The national parks on the east coast are lacking, not to take away from Shenandoah (in the words of Ant Greg, a money racket) or the Smokies. We just don’t have very many. 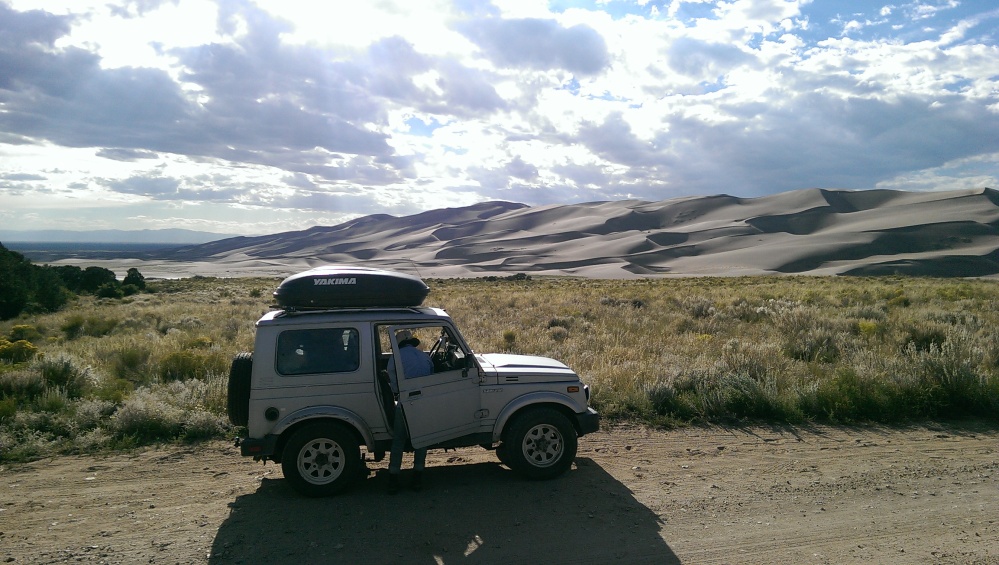 Upon reaching the park, we discovered a new problem. National parks have a vendetta against dogs. I won’t go into too much detail, I mean I “understand” thier reasoning, but I doubt a dog will do as much damage to a park as a shitty angsty teenager with a paint marker and/or pocket knife. 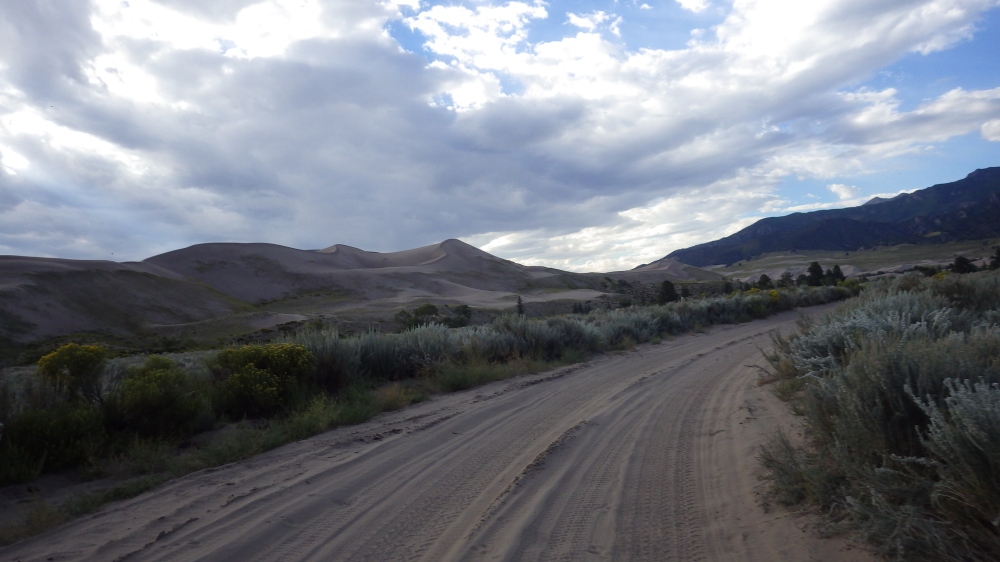 We did find out that there is a primitive road that leads out into the dunes wildlife preserve, and that means “dogs welcome, free camping, no toilets” which is right down our alley. The primitive road is a 4×4 road, with some deep sand apparently. I was a bit nervous about that, but figured Bumi could handle it. Turned out to be some of the most challenging driving for me up until that point in the entire trip, it more than made up for the pavement time we had to take to get to the park. Lets also keep in mind 6 months ago I hadn’t even had a license, and up until the first day of this trip had only ever driven on pavement. I may have left that out in previous posts…
Sand is a funny thing, wanna stop? NOPE. Wanna turn? how bout sideways?

The road leads to a valley filled with wildlife (as a preserve should be) the first few primitive campsites had bear boxes to put your food in, we opted in on this option. There are bigger Noodle bears out here. (see previous post, the one about Noodle. duh) So we pitched camp in the shadow of the mountains, not too far from the steady sound of the nearby stream. After some attempts at some amatuer foraging (wild Yucca tastes like dirt) we burned some old pine that had fallen in a previous wildfire and passed out. 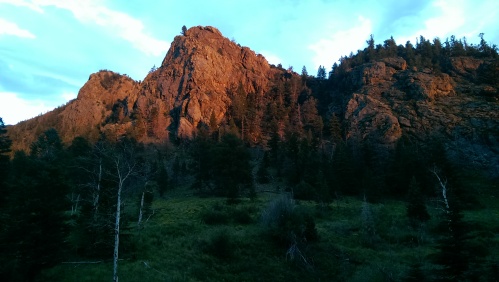 I was woken in the night by the sound of a large animal what had to have been just feet from the tent. Of course I assumed it was a bear, since in my half awake mind no other animals exist in the forest besides bears. I took a peek out of the tent and was surprised to see a rather large deer grazing just 2 feet from the tent. It seemed rather unfazed by my headlamp and continued to eat in peace. I watched it until I again found sleep. Her name was Donut.
In the morning we woke up early enough to spend some time out on the Dunes before the sun would have a chance to obliterate my frail irish skin. We broke camp and made the sandy trip back with no problem. This time we ran into another Samurai, this one being clearly much cooler than mine, and driven by who I was pretty certain was Christopher Walken until he started talking (bummer.) We talked a bit about how cool we are compared to jeeps, well not really, but he was a super cool guy. So we traded info and moved on. ONWARD TO THE DUNES. 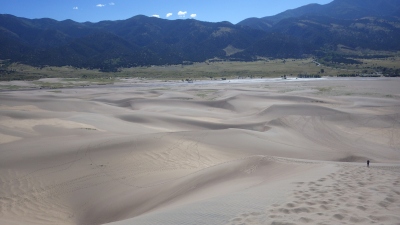 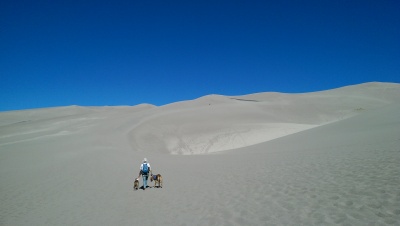 We started our trek up the dunes on foot. Considering we were unaccustomed to the altitude, and we were traveling in deep sand. We were wasted and dragging rather quickly, including the dogs. I tried to have them drag me up the hill. We eventually made it up to the first high dune, which is as far as the park will allow dogs. Though they do allow people to sled down the hills, I watched a 50 year old man clearly get concussed after smashing into the rocky bottom of a dune. We sat with an older woman at the top of the high dune and took in the scale of what was before us. Its strange to make a connection with a stranger just because they’re from a state that is closer to our home than the one we’re currently in. But it happens. “North carolina? THATS ALMOST CLOSE TO WHERE WE’RE FROM!” Either way both parties were excited about Colorado. Back to Salida to meet up again with the trail.