Well here I am, sitting in the absurd humidity after a night of torrential downpour and thunderstorms, in a small town in tennessee where the jack daniels distillery is apparently located. The distillery is located right along the trail in the town of Lynchburg, probably more on purpose than by accident on part of the creator of the TAT(Sam). 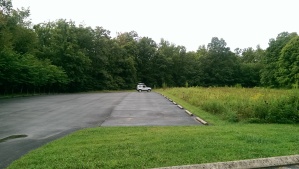 We are living in state and national parks at this point. Every night spent at what ever state park we can meander our way to near the route. Its actually quite beautiful. On weekdays we are more than likely the only campers around and get our pick. Last night was savage gulf state park in Tennessee, fantastic grounds and well taken care of. Plus a pretty rad looking ranger post. The night before we had to “stealth” camp at quinn creek state park. The camp itself was closed but we found a small group of locals that were staying there for their friends bachelor party. Nicest guys, and we actually appreciated the fact that they were up all night playing music and hanging out. Humans keep the bears away. 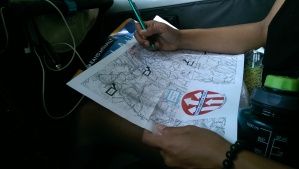 This was after the first day on the main portion of the Trans America Trail. Which went swimmingly, when I say swimmingly I mean that our truck bottomed out in a creek crossing and started to fill with water. This happened about an hour into the first part of tennessee, after about 3 other creek crossings you come across a very deceptive crossing. There is a very large jutting stone right through the middle. The left side (westbound) looks to be safer, but in reality drops off the end of the stone without notice. We were lucky enough that after a short time a local came upon us and was able to pull us out backward. We then corrected our path and made it across without further trouble. Always check your lines first, I was bullheaded and learned my lesson quickly. 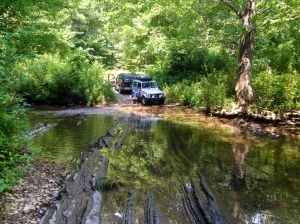 After the first day the number of dirt roads diminishes and sort of falls into a “few and far between” category. They are replaced by mostly winding country farm roads. For the time being at least. We were able to find Wifi in Lynchburg for blog updates and will probably find camp nearby.