The car, not the japanese warrior. Well I guess it could be considered that as well. I’ve heard the Suzuki samurai be compared to a sardine can, and it truly feels like it when you cram two humans, and two human sized dogs in it. The Truck is barely long enough to even stretch your legs out. So sleep comes fleetingly.

We woke to the sound of trucks pulling into the rest stop and use the bathroom, about time to get moving.

We figured it would be safe to proceed back onto the trail at this point, the sun had been beating down on the desert and you could not even tell that it had rained the previous day. Finding the trail again was not at all an issue either, it followed the exact highway that we had to detour on, you could literally see the dirt road 20 feet to the side of it.

The road weaves back and fourth along the highway, with flooded tunnels traveling under unknowing drivers. We are like the head of a needle, the dirt roads the thread. Massive tunnels cut through stone and we eventually find our way through a few towns. In town we follow a small OHV (off highway vehicle) trail. This entire area is very open to ATVs and even allows them to drive through the streets, there are also small farm trails that work through the actual towns.

We finally make it to the Paiute ATV trail that cuts through Fishlake National Forest. Our vehicle is closer to being an ATV than most, so we make our way up to the closest peak to camp. At which point I wrote this somewhat distasteful ode to the Pinon tree:

“Pooping under the Pinon tree

the deepest of red mountains encompass me

This trail was beautiful and we came across a grove of aspen that put us both in awe, it felt like we were in a Tolkien book. 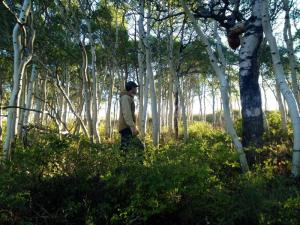 We also encountered the most traffic on this portion of the trail.

You honk at them, and they just look at you like YOU’RE the jerk.

After some switchbacks we make it into town, what the locals call “Paradise, Utah.” The rest of the world knows it as Kanosh, if anyone knows it at all. We spent some time in the town there talking to the gas station/ auto repair shop owners. Great couple of guys that will make your day. They will take your mind off of the upcoming hundred miles of open desert. They described Utah as “the land of funny liquor laws, and funny underwear” (cause the mormons.)

I was nervous about the final section of Utah, I had never driven in open desert. Especially not off road. They calmed my fears a bit and gave us a bit of reassurance and made off into the desert that crosses into Nevada. Actually, the first few miles were a blast, lots of hills and tight turns that made me feel like we were baja racing.

Its a long day, particularly if its a hot one. We hadn’t used the air conditioning this entire trip and we weren’t about to start now. We kept the windows down and as long as we were moving the desert was not so punishing. Its when you stop, thats when it gets you.

We could see the bottom most part of the Sevier Lake, the first Playa or dry Lake bed of this sort that we’ve ever seen. We couldn’t tell whether it was real or not and the earth threw new natural oddities at us. For the most part we were on dirt road, toward the end of Utah the trail has us on some barely visible single track, sage and brush getting caught under the car and burning from the heat of the engine giving off a wonderful aroma. At this point we can see Nevada, and b-line it towards the Great Basin National Park.