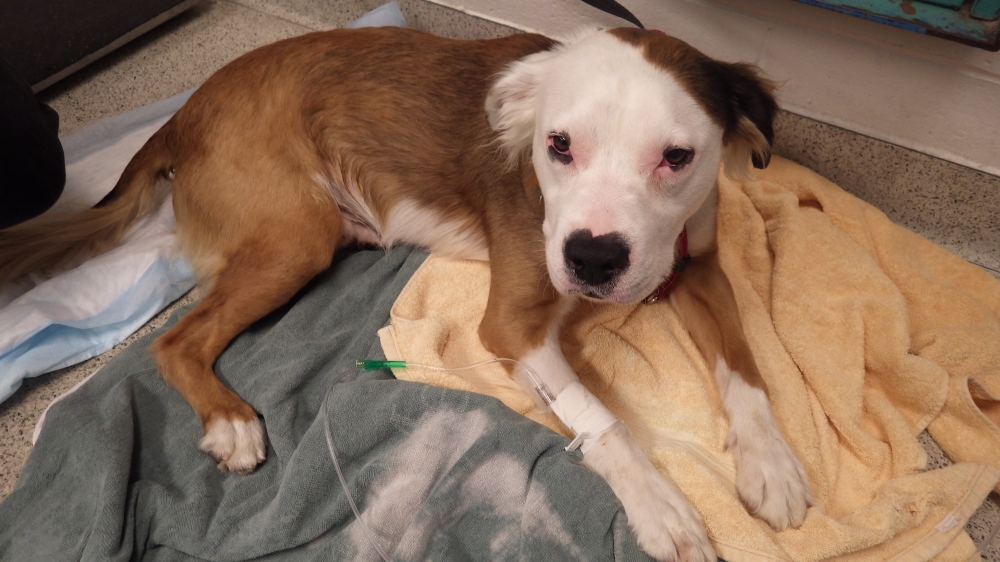 Being that this is my first post to this blog I guess I should introduce myself: Hi, I’m Chelsea and today I made the decision to not bring back Locke in case his heart fails.

Every night around 9PM Locke likes to piggy snort and hover around his food bowl to remind us that he absolutely CANNOT wait any longer to eat, but last night he wouldn’t even touch his food.

It’s hard to draw a line between paranoia and actual emergency; dogs normally get into trash and things that they shouldn’t, so waking up to him puking up lost goodies is a common sight. “Maybe he’ll pass whatever is bothering his tummy, it’s not the first time he’s gagged up a toy he swallowed.” As I went to clean him up in the shower I decided to sit inside there with him for a bit. This isn’t normal…this isn’t going to get better on its own…he’s hurting.

I took him to UPenn Emergency Vet and first, I have to say Thank You. They were compassionate, genuinely caring, and knowledgeable. Besides the fact that Locke was severely dehydrated and needed IV fluids, it seemed like standard surgical procedure to remove an obstruction from the intestines. Once again, dogs eat crap all the time.

Just as my roommate and I are about to relieve some stress over Korean food we get a phone call, “Locke suddenly seized and went into cardiac arrest. His heart and breathing stopped. We managed to bring him back but we need your consent on how to move further.” The chances of a dog making it through surgery after a heart attack is low, but Locke is young and otherwise healthy. There is a possibility he can go into cardiac arrest again. If they bring him back a second time and he makes it, his life will be full of crippling pain and supportive care. I love Locke as if he were my own, but he is a dog and dogs live in the moment. In case he had another heart attack, I chose to spare him of that life.

This picture is of Locke right before his heart attack. We got to visit him once more before surgery. It was unnerving to see the whole veterinary staff surrounding him as he lay on the metal cart. It looked hopeless, but then he looked up at me and wagged his tail. Locke’s surgery was successful.